State Sponsorship has changed and in fact, it is no more the state sponsorship as it is supposed to be. It is the same thing as the SkillSelect itself, in the sense that both are the selection based invitation process. Both have the same principle and procedure, the only difference is you can apply for State Sponsorship with a score of 55 points while SkillSelect needs 60 points score to be accepting you. As well as this, for you to be nominated by the state you should apply as you would for SkillSelect and that both have now become an invitation-based system.

So, what has changed and what is the impact upon individuals. By being a selection based invitation system, you just apply for state sponsorship as most of the others and wait for you to be invited for being a better-qualified applicant than others. This would be the same as in SkillSelect which would prefer to invite for application to the applicant with 65 over 60. In state sponsorship, it’s not the point score as all of the applicant will have the same score rather it is the quality of the applicant in terms of English, experience and when they have applied that is important for selecting of an applicant over others. It’s like a job application where your selection is based on your qualities compared to others.

Now, isn’t it the same in SkillSelect processing as well? So, what’s the point? For you, if you are the last two applicant and if there is only one spot left in the occupation ceiling and the body has to choose one of the two or more, they will look at point score which is based on English and experience predominantly and then they would look at the time applied and can go further into individual qualities. The only differences at this stage that separate between SkillSelect and the present state sponsorship, in my view, is that state doesn’t care about the age factor while SkillSelect may not care about the individual aspect of English or experience something that can score a point.

Then there is another aspect of the equation mostly ignored or forgotten –the occupational ceiling that may be applied to occupations by the department. What if you could get selected but there is a ceiling that would prevent you. Occupation ceiling is crucial as there is a huge volume of applicants in one occupation over others and people might not get a chance in both systems just because of this. The lower the ceiling is filled, the higher your chance of getting selected, which often we ignore.

The future o the state is more uncertain as the present system is meaningless and it’s not much different and supplementing to the SkillSelect process as it should be. And, the fact that the state has opened the entire occupation list now merely shows that they just want to look like a party to the visa rather than completely getting out of the equation. There is not much meaning to state sponsorship if there is not a specific skill that the state, in particular, may want from the general SOL list. Add to that, the state system is not much different to the SkillSelect rather than just that you can express the state nomination and be granted one at 55 while SkillSelect at 60 only points. It may just be undermining the 60 point score required and may be giving someone a preference over others and may have a risk of internal preference going on. The point score is a merit based system and should not just act as a lottery system where an individual at 55 score can get lucky over other, without strict and clear preferential system, and get an opportunity to apply for residency which one would not have been able to apply should they require a score of 60 in State nominated programs.

If the applicant is more than likely to stay in Sydney and the EIO score is 60, isn’t the state opening whole list of skills to be able to apply and the mere individual quality as a test at 55 just another way to retain, attract or confuse individual and keep pressing the power they may have. Or, is it merely their position and their ability to be a player and staying being a player in the immigration management of the GSM that they are playing about.

Perhaps it’s time to think beyond the box. 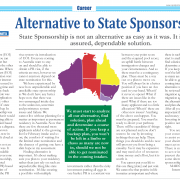 Want to join the discussion?
Feel free to contribute!

Replacement of the 457 Visa
Scroll to top